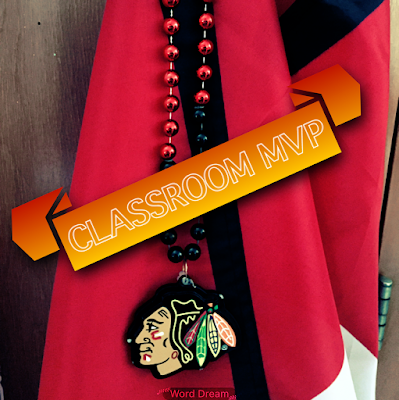 So it has been an eventful week between the Great Shake Competition and the field trips to visit the Jr Highs in town. One thing we made time for was to award a classroom MVP.

If you are unaware an MVP is considered the Most Valuable Player and is given out to athletes in team sports. Since my classroom is hockey theme (check out my classroom link at the top) I decided to create this award to honor students who are doing amazing things in the classroom.

This is my first year doing this activity and it has developed into something that is not only an honor, but it is really student driven. At first I selected students who I noticed working hard in small groups or improving in a subject, such as reading. I announced them in front of the whole class and awarded them the MVP necklace, which is just a beaded Blackhawks necklace. The students would clap and the MVP would wear the necklace all day. It started as a way for me to point out those students who I noticed were trying or those students who are constantly doing good things. After I had a group of three students I began to try something different. I put all the past MVP's in charge of choosing the next MVP. This could have crashed and burned or turned out great, and luckily the students really took it seriously. I told them that they had to nominate someone who followed the classroom rules or truly stood out as a superstar. I decided to call the group of students who earned the MVP award the Hall of Famers. Those who earned the MVP award would join the group and be able to help nominate the next MVP. The students would nominate a person and say why they thought they should be considered the MVP then there would be a vote. All members had to agree for the nominee to get the award. We tried to award students on Thursdays. Sometimes the group couldn't agree or wouldn't meet to discuss so some Thursday's we wouldn't have an MVP.

When an MVP was selected it was kept a secret. On Thursday mornings, typically after our class had morning meeting, the Hall of Famers would line up in order of induction at the door. The newest member was at the end. I recently got a mini Stanley Cup and decided to do what Hockey Players do and pass the cup after a lap around the ice. I would play a song, currently One Direction's Drag Me Down, and the students would walk laps around the classroom with the cup. The leader would hold it for a lap then pass it back. Once they pass it the the next person in line they would go to the end of the line, thereby making the second person the leader. This continues till the person who was originally was last in line has the cup. That person would then do a lap the give the cup to the newest MVP. It can get pretty exciting as the kids are waiting on the edge of their seats to see who will get it next. I then give the MVP the Blackhawk necklace and they wear it all day. I've tried to choose music that is considered a pump up song to build excitement and I've even recently added a police light to give it sports ambiance. 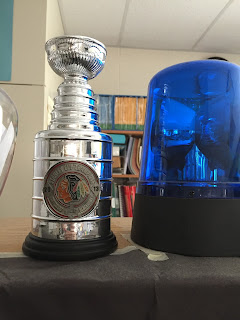 I've enjoyed doing this because it build students confidence and gives them something to push for. I have also enjoyed watching my Hall of Famers select students because they never put anyone down but instead select students to celebrate and often give great reasons. They get to run the show and I rarely if at all give input. They enjoy getting to be in charge and have that responsibility especially for something so positive. 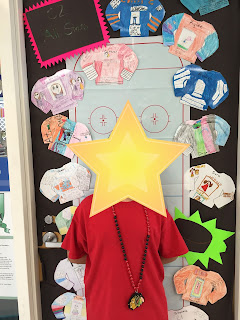 Recently outside the classroom I have showcased the Hall of Famers Club by taping up their picture with the MVP award necklace (sample picture above). This is a tribute to them but also a way to get other students to ask them about it. I think too often we get bogged down in the negative, whether it's what we need to get to in the subjects we teach, why students aren't completing their work, or the endless playground drama saga that replicate the last Days of our Lives episode. It's time that we make time to celebrate those students who always give their all and those students who are making gains. I always tell my Hall of Famers, the MVP award isn't about straight A's it's about who is trying.
I'm sure you all have other amazing ideas you do in your classroom to celebrate the positive, so feel free to leave some of your own ideas below!


Hope you have enjoyed reading about my classroom and our MVP awards! Until next Week!
Make sure to share and follow me on Periscope and Twitter!
I will be Periscoping live in Tuesday April 26th at 5:30 CT. Follow me at mlee97622
Hope to see you there!
Posted by Megan at 3:32 PM