So something new I tried this year was an end of year countdown with my students. This was the first year in the three years that  we dismissed in early May. This of course brought on excitement, pressure, and utter panic. It felt like the end of the year just snuck up on me and there was so much to do and so little time. Since my students had plenty of end of year testing to do...sad face, I wanted to do something that made learning fun again and kept them engaged for the last few weeks. 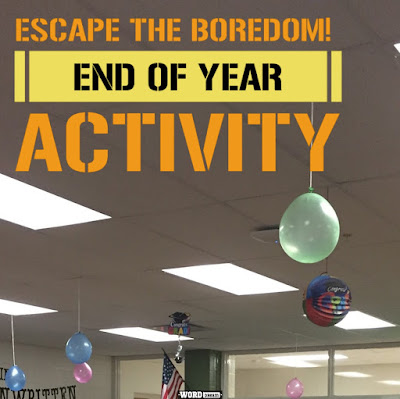 I created a countdown of sorts with paper and balloons. First I created some fun activities that the students might enjoy doing, then I planned out my week of school. Like I said time got away from me but next year I hope to do 2 weeks and not just one. I then created paper cards with the different activities on them. Following that I rolled the cards and placed them in the balloons. After blowing up the balloons with the cards inside I labeled the balloons with a permanent marker. I wrote the different days of the week, but you could do letters, numbers, dates, etc. then on each day we popped one and read the card inside.

This was so much fun! The students couldn't wait to pop the balloons and see what the surprise was. It was also a great classroom management activity because I told the students they had to earn each balloon. If the whole class was not on task or being positive and respectful then I wouldn't pop the balloon. Also, if I felt that a student wasn't following the rules that day they couldn't participate in the activity. I didn't have to do either and I believe this is primarily do to the excitement surrounding the balloons and the activities. Escape the Boredom Countdown is just simple, small activities that allow students to bond and be engaged the last few days of school. I really enjoyed doing these activities and seeing the growth in the students from the beginning to the end of the year.

I'm currently in the process of making a TPT store and posting this as one of my free products...but since I'm not as computer savvy as I thought it might take a while.

So you might be wondering what activities I put in the balloons? Well, they were all planned out based on the time I had in the day to do them and slowly built in excitement.
I started with a Rock Paper Scissors Tournament where students competed the best two out of three then would cheer for the winner. The winner would then search for another winner and the cycle would continue until there was only one winner and everyone cheered for them.
I also had write a letter to a future 5th grader, which became our A-Z book for a successful 5th grade year. We had sit next to your friends day, which was clearly a favorite, and game day where we had an intense escape the room game which the students loved. We also had extra recess which is one of my favorites. You could definitely do others like: movie day, minute to win it day, class outside day, hour of code day, Kahoot tournament, a theme day. There are so many options to keep your classroom busy on the last few days and the surprise will keep them engaged.

What does your class do on the last few weeks of school?
Share your ideas here or on my band new Facebook Group
You can also share on Twitter:@teaching_power
Follow me on Periscope: @mlee97622